The Gwinn Girls Varsity Basketball played their second game of the season in back-to-back home games.  They defeated the Gladstone Braves by a final score of 44 to 29.

Mike James brought you all the in game action live on Fox Sports Marquette 105.1 and 99.9 and on GoToGwinn.com.

In the first half Gwinn took an early lead with the score at half-time of 15-7 in favor of the ModelTowners.  High-scorer Tori Lauren for Gwinn ended the half with 10 points.

The second half featured more ModelTowner domination.  The defense played a key role in the victory holding the Gladstone Braves to under 30 points for the contest. Mike was able to talk with Coach Olsen at the conclusion of the game.  Coach Olsen had this to say about his ModelTowner defense, “To hold a team under 30 points you’re going to win a lot of games.”

Tori Lauren was the high-scorer of the night with 20 points and 16 rebounds.  Go ModelTowners! 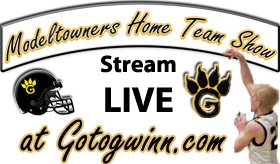